DAY 21: (Danny) I’ve mentioned before that it’s always bittersweet when we leave one country and travel to our next destination. 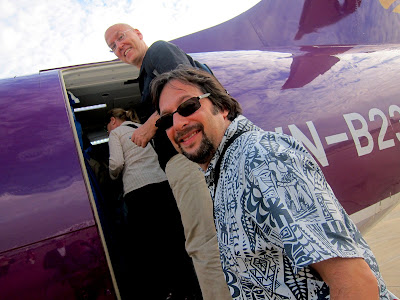 This time, I feel especially sad to leave Cambodia and its lovely people. I’ve made so many friends in Cambodia and wish I had more time to spend with all of them. Even though only 1% of the country’s population has Internet, I was amazed that almost everyone we’ve met is on Facebook. I’m looking forward to staying in touch and sharing pictures and videos.

We were so busy in Cambodia, we didn’t have time to write or post many pictures or accounts of our time. We worked 16-hour days for almost the whole time. 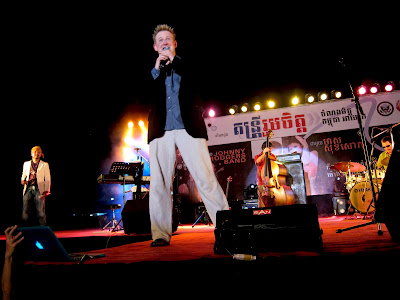 Driving, loading, unloading and of course, sound checks and performing. We love it all and the music is why we came on this trip but meeting all these people and the sharing of cultures is what’s changing our lives. I was constantly blown away by the youth of the population! 60% of the population is under the age of 30 and although the reason for this is unbearably sad, the resulting youthful population seems poised and ready to catapult into the future. 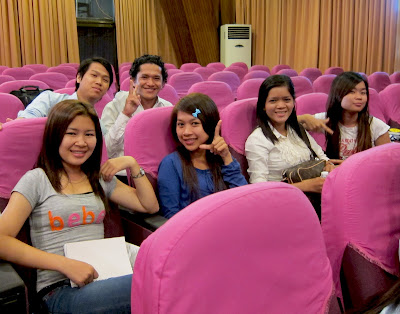 Humble, kind, beautiful, warm, smiling faces greet you at every turn and there is a spirit of peace which permeates the air.

The day after we landed, we conducted a Master Class at the Ministry of Culture. There was a mix of western classical and traditional Cambodian music students and faculty. 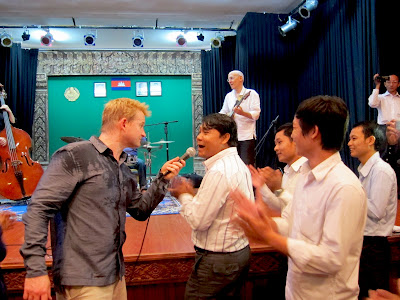 We had the singers improvise over the blues and had a great question and answer session. 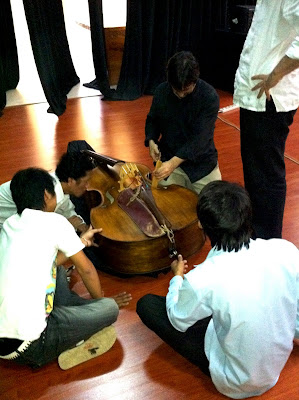 After the class, we rehearsed with some local artists who were to join us in our two big concerts. 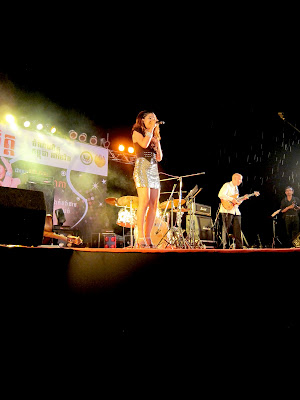 Meas Sok Sophea, a local singer who has the top song in the country and the great Cambodian rapper/MC, Pu Klaing, brought their artistry and flavor to the table. We rehearsed with the Ministry’s traditional percussionists and a great young band called Blackwood. This short rehearsal was all the time we had to put together a multifaceted and bi-cultural show to perform in Kampong Cham and Phnom Penh for more than 3,000 people at each concert. 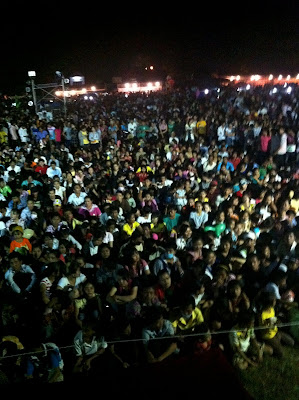 We had the chance to visit the U.S. Embassy and to meet with the Ambassador, Carol Rodley, which was both an honor and a thrill. We’ve had the pleasure of meeting three U.S. Ambassadors on this trip and always enjoy seeing the Embassies.

The drive to Kampong Cham was a three-hour journey through the artery of Cambodian life outside the city. 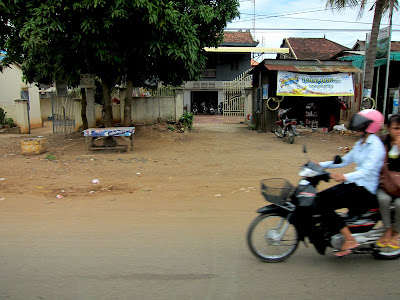 The road was bordered by lean-to shacks and stilt houses that sometimes doubled as stores and sleeping quarters. There were no gas stations so there were stands on the side of the road selling gas in coke bottles for the scooters. 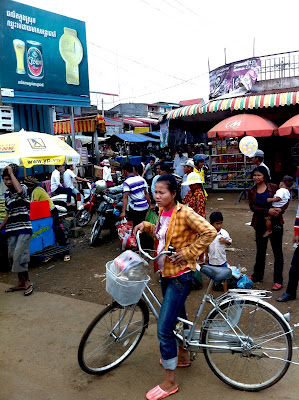 The traffic thinned out some and the scooters gave way to bicycles as we got into the smaller towns and most of that traffic was school children coming home from the first shift. The students either went to school from 7:00-11:00 AM or 2:00-5:00 PM. The early shift seemed preferable because the temperatures weren’t as high. We saw rice fields, Cambodian white cows, chickens, little horses and lots of dogs. We stopped for our first rest stop at a conglomeration of roadside stands and as soon as we stopped, young girls and children mobbed the van, trying to get us to buy their fruit and bananas. 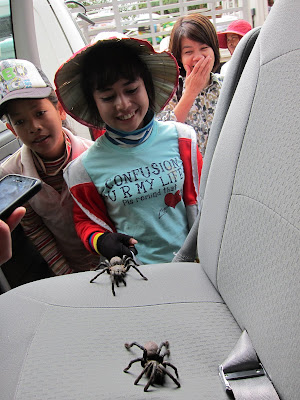 Each of the teenage girls had live tarantulas on their shirts and one gave me one to hold. I saw a giant basket of fried tarantulas and crickets at a nearby stand.

The drummer from Blackwood convinced one of the girls to let him have a tarantula which he brought into the van. I asked him to pass it to me where I was sitting in the front next to Michelle, our Embassy liaison. I had mentioned we had a spider in the car, but she thought I was joking until she saw it crawling around on my hand. I was impressed by how fast she jumped into the back seat. In the meantime, Joe and Johnny were getting a kick out of the CB radio in the van. They hadn’t seen one in a while. 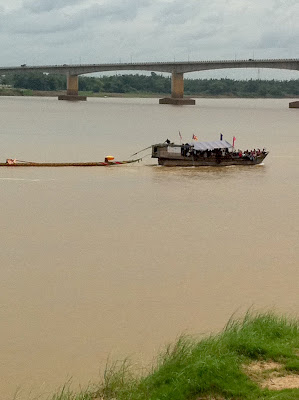 When we arrived at our hotel in Kampong Cham, the afternoon sun was shining on the Mekong River. I’d heard about this river since I was a young child and finally, to see it was amazing. I heard Cambodian music coming down the river and I saw a junket-type boat pulling a traditional dragon boat. This type of long thin boat seats 50 rowers was being transported to Phnom Penh to participate in the Water Festival. Every year, crews and dragon boats are transported to the river festival to participate in races and competitions. Three million people were already descending upon the city to celebrate this year’s festival. 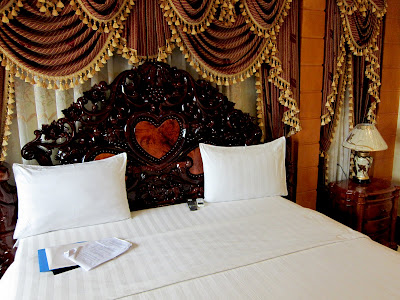 The hotel in Kampong Cham had beautiful, wood-carved statues and chairs. The rooms had beautiful, ornately crafted wooden beds. My room also had a little balcony that overlooked the Mekong. 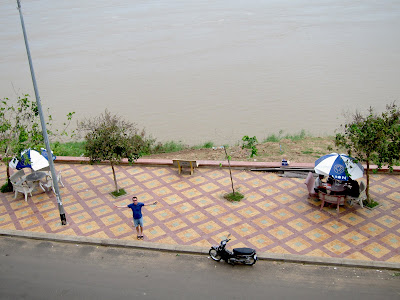 In most of the countries we’ve been to, I’ve been a lobby rat, where I’m sometimes able to find wireless. The wireless at our hotel was down but I was able to get wifi at a great cafe next to the hotel – Smile Café – an open-air Cambodian restaurant that helps young people in need in conjunction with a Buddhist association. The owner and I became friends right away and because they were open daily until 3:00 AM, he saw a lot of me.

We went to the football (soccer) stadium to load in and do our sound check. 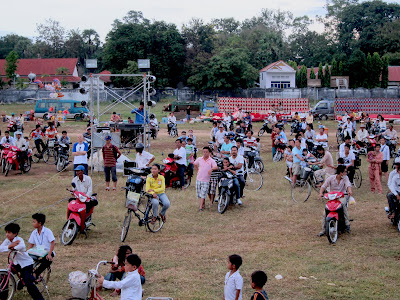 As soon as we started playing, the field filled up with people on scooters and bicycles who were on their way home from work and school. They sat there on their bikes and watched us sound check and when we left to change, they rode away.

We came back to play the concert and when we saw the stage and lights, we were amazed by the volume of bugs flying around. It looked like it was snowing bugs! My white drum skins were covered in black bugs. When I walked on stage, I was swarmed by critters of every shape and size. I thought, I am one with these bugs, I accept them, they won’t bite me. We’ve all been taking Malarone pills for malaria but forgot to bring our Deet cream. Not that it would have worked in this situation. 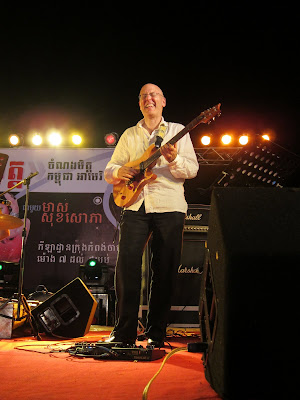 I thought, don’t open your mouth on stage, but I knew I had to sing and wondered how much protein I’d be taking in that night. Probably not as much as Johnny! It was funny to watch the guys battling the bugs at first and I saw everyone have a big one fly onto their ear or mouth. While I was playing, I found a Praying Mantis hanging on to my floor tom and I had to play around him for a few tunes. Brian went to play his gogo bells for Mary Jean and there was a giant grasshopper on the bell so he was late on his entrance because it freaked him out. Then I saw a giant brown bug on his neck that looked like it was about to suck the blood out of him. 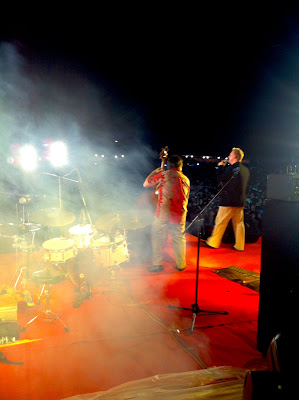 The stage had a giant backdrop with our pictures and there were about five smoke machines that kept clouding the stage. During one of the quieter tunes, I requested they be turned off because they made too much noise. There was a strobe light by the footlights that, at one point, made me feel as if I had been hypnotized. 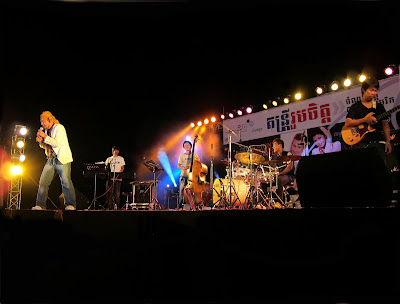 The MC Puh Klaing really got the crowd going with his intros and antics. He was great helping translate the song intros and keeping the crowd informed and entertained. They loved our music and when Sophea came out to sing two of her songs with us, they were even more excited. We played more of our set and then Puh Klaing came out with the Blackwood Band who gave the crowd some of its signature rock. They were great and when we came back on stage, he joined us for a great version of Ain’t No Sunshine! We really enjoyed being on and off stage with him! Sophea came back with her dancers and after, we did a rocking version of You Can Leave Your Hat On. 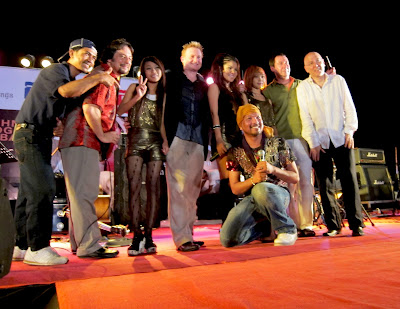 After the show, we hung out at the Smile Cafe with Pu Klaing by the Mekong River.