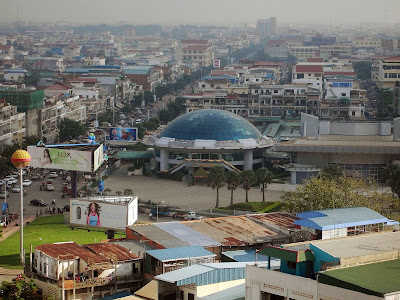 DAY 15: (Danny) As soon as we touched down in Cambodia, I had the greatest feeling! I was happy to be here and knew we were in for a great adventure, one that would change us forever. Our U.S. Embassy liaison spirited us through customs and we were on the road to the hotel in no time. Because it was rush hour, we were treated to Phnom Penn traffic which was an exiting adventure filled with scooters, scooters and more scooters. 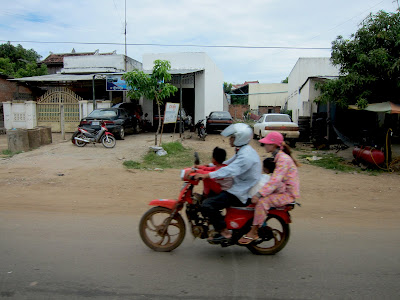 We also saw many Tuk Tuks, which are like rickshaws but with a motorcycle front. I was amazed how many people they could fit on one scooter and I saw as many as four at a time, although one of those passengers was a baby. We have heard of as many as five passengers on a scooter, but I haven’t seen that yet.

Our hotel is amazing and everyone we’ve met thus far is awesome. We checked in quickly and then had a dinner meeting with the embassy folks to go over our schedule. While we were waiting for our embassy liaisons, I sat in with a traditional Cambodian drum and xylophone duo (after the drummer showed me the basic pattern). 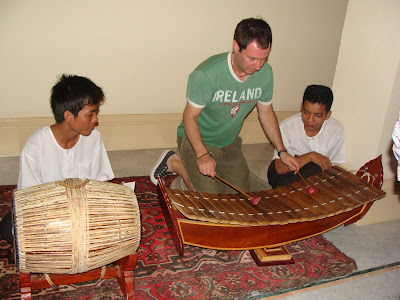 They were really cool. Our hosts took us to Ramdeng, a creative Cambodian restaurant that used local cooking school graduates as the help. I had told my best friend Colleen that I was going to eat some crazy stuff in Cambodia after she suggested I try monkey brains, like in the first Raiders of the Lost Ark. Well as soon as we opened the menus, Johnny spotted sauteed red tree ants and I knew I had to try that. 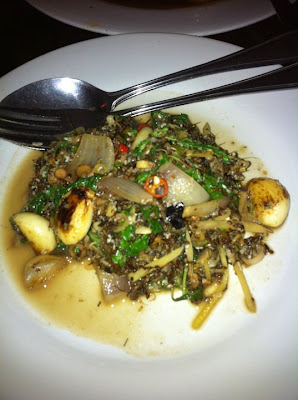 Then we saw a snack: crispy tarantulas with lime and pepper sauce. 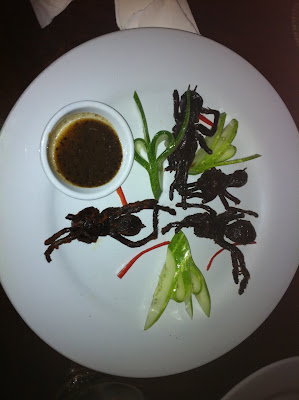 I told everyone I was going for them and the cameras came out. I was the first one to taste the spiders and then when I exclaimed them to be crispy and spidery. They all tried both dishes. The spiders tasted like bacon and the ants had a thread-like (?) after taste.

There was also fish in banana leaf, mango salad, sauteed string beans and tiger beer. We had the best time and I’m so proud of how adventurous the group was tonight. I feel there is an exuberance and hopefulness of the youthful population here and you can feel the excitement everywhere you go. I love the Cambodian people and if this first night is any indication of what’s to follow, then we’re in for a real treat!