DAY 25: (Danny) In Cambodia, we played two big concerts and conducted a Master Class. Most of our days were quite busy – sometimes 16 hours long. So, on our one free day, we woke up early and left our hotel at 6:00 AM to fly to Ankor Watt to see the great temples and ruins. The flight from Phnom Phen was about 45 minutes long and a lot shorter than our other flights (with a lot less gear). Our liaisons, Michelle and Pekaday, were kind enough to set up the flights and arrange for a driver/guide. 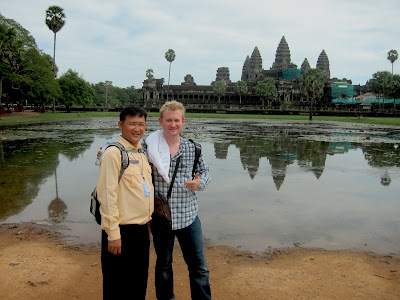 Mony is a friend of the Embassy and one of the most knowledgeable guides in the area. He was assigned to show the Secretary of State around just a few days before he was scheduled to show us around. And he had done the same for President Clinton so we knew we were in great hands and would learn a lot about the history of the temples. We got our passes to the Ankor Watt Eco Park for about $20 (U.S.) and proceeded to the first stop: Angkor Watt.

There are water filled moats surrounding the temple. The grounds are lush and expansive. We saw some funny monkeys by the entrance who were entertaining us and begging for bananas. 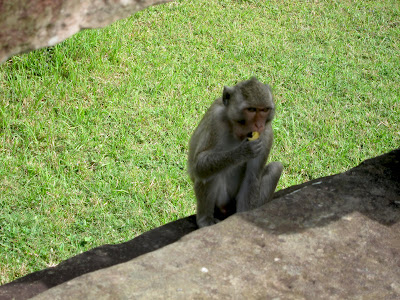 Mony called them “tourist monkeys.” Our guide knew so much about every detail of these temples, I understood why he was chosen by the State Department to guide us. 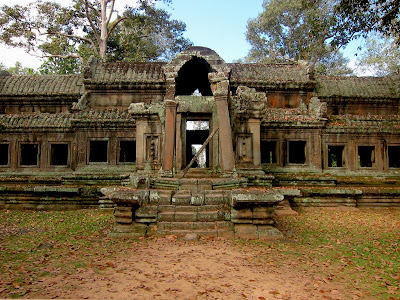 It was a bit overwhelming to hear all of the history at once and reminded me of touring the Vatican and cathedrals of Europe, except it’s easier for me to wrap my head around the Christian history. 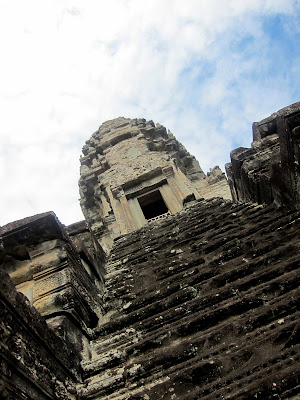 We were all really tired and the heat was pretty intense but we made it through the grounds. Mony took us to lunch at a great open air restaurant where we had an amazing meal and purchased some gifts. After lunch, we went to see the famous temple filmed in Lara Croft: Tomb Raider. 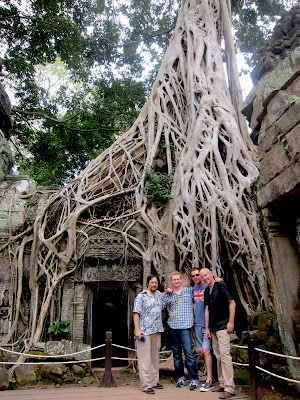 Nature had taken over the temple and the tree roots were growing through and over the rock. 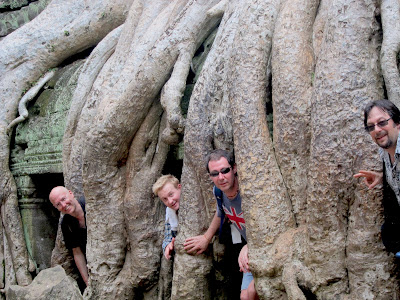 We took some great band shots and learned so much about this ancient culture. Pu Klaing had told me to pay attention at the temples in order to understand the Cambodian people and their history. He said to take it all in and someday, to try to put it into a song for all the world to hear. No easy task, but one that is inspired. We hit one more temple on the way back to the airport which was called the Smiling Buddha temple (look at the picture and you’ll know why). 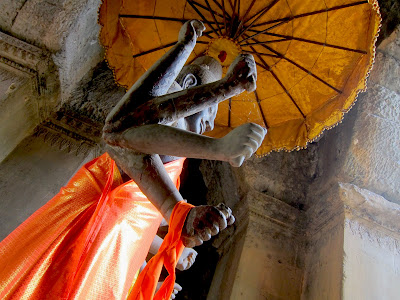 I had to sit this one out and relaxed on the stone wall outside the entrance, where I observed the structure from the outside. I realized there are some things that can only be felt and are not possible to describe in words or intellect. I was overwhelmed by a sense of impermanence when I saw the crumbling stone and felt that just like these temples, all structures are unstable and pass one day back to the nothingness from which they were formed. 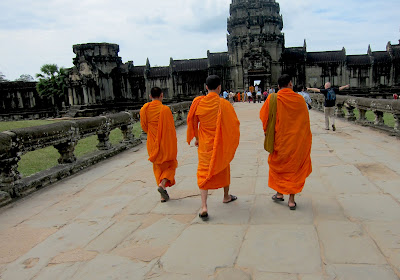 This ancient city of temples was once home to millions of people who lived and died within the shadows of the temple walls. Their voices echo in the ruins and are a reminder that we are the awareness in which all life unfolds.